Title: Wings of War
Rating: PG
Pairing/s: N/A
Character/s: Merlin, Arthur
Summary: Faced with a threat greater than any Camelot has ever known, Merlin searches other worlds for a magic strong enough to defend the kingdom.
Warnings: N/A
Word Count: 240
Prompt: #39 Silver
Author's Notes: This is what happens when I play Darksiders on drabble day.

luxorien
Rating: PG-13
Pairing/s: Arthur/Merlin
Summary: For one battle, at least, Arthur's sword is Merlin's to command.
Warnings: N/A
Word Count: 1986
Author's Notes: One of the things I like about exchanges and challenges is the opportunity to write the kind of fic I don't normally write. I very rarely write romance and this is the first time in my entire life that I have written slash. I hope it lives up to expectations. Merry Christmas! Many thanks to

tambear13 for betaing. Any remaining mistakes are of course my fault.
Disclaimer:Merlin is owned by the BBC and Shine. No copyright infringement is intended and no profit is being made. Don't send us to the dungeons. 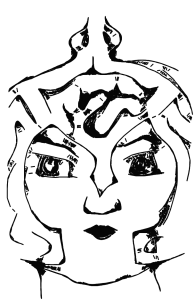 The human settlement of Crucleoht has sheltered travelers along the eastern trade route to the capital of Estilyon for as long as anyone can remember. Its inhabitants are innkeepers, farriers, horsetraders, farmers, grocers, peddlers, leatherworkers - any trade that the passing merchants and laborers may have use for. While the town could subsist on the local harvest, its position on a major commercial artery has allowed it to prosper rather than simply survive.

Wooded hills roll away to the south, and the humans harvest some lumber here, but the terrain makes large-scale logging impractical. Hidden away beneath the trees is the halfling community of Summerwater. Near the banks of the Yarwe river, they farm small plots of arable land, supplementing their diet with fish and game. They value their indepedence and their privacy, but they have traditionally been on favorable terms with the humans of Crucleoht. Some of the more ambitious halfling traders keep quarters in the human town so that they can sell the skillful wood carvings for which they are known. Other Summerwater natives have taken jobs as barkeeps or stablehands1 when the inns are particularly full. Most tire of this sort of employment long before the trading season is over, but the arrangement puts enough coin in their pockets for buying books or other curiosities from the merchants of far-off lands, and the humans are happy to have a supply of temporary labor when traffic is heavy.

Those humans whose memories stretch back a bit further than the previous night's wenching have other reasons to be favorably disposed toward their diminutive neighbors. The inhabitants of Summerwater offer aid to any humans who are lost or injured in the forest (preferably without revealing the location of their home) and their clerics provide healing to any who have need of it, regardless of race (however, donations are encouraged if the patient is a stranger). When a horrifying undead abomination wandered near the town, Summerwater clerics stood shoulder to shoulder with the human militia.

The humans, for their part, have forbidden settlement on the halflings' land, and consider Summerwater under the protection of the magistrate's patrols. Though the kingdom's legal code does not require that halflings be given equal protections, the leaders of Crucleoht have always enforced the law impartially. At least, that was the state of affairs for decades. In recent years, relations have been strained. A halfling was accused of thievery and nearly executed without fair trial, requiring the elders of Summerwater to appeal to the authorities in the capital. There was also talk of human settlers in the forest, and the halflings were forced into tense diplomatic negotiations in order to save their land.

Corliss Greenwood of Summerwater is the daughter of an herbalist and a woodcarver. She has a child's memory of the conflicts between her people and the humans, mostly images of whispered conversations in entryways. As she grew older, she learned more about the specific incidents, but did not allow prejudice to filter her outlook. Her name means "cheer" and she has always been irrepressibly generous with her time and belongings. She entered the service of Yondalla when she was barely more than a babe, toddling behind her father as he gathered herbs for the healers and "helping" them with their preparations (on one memorable occasion, her help destroyed an entire vial of valuable myrrh oil).

As a young girl, she spent many evenings poring over the maps that her mother brought back from Crucleoht. Analise Greenwood owns a small shop in the human city, and often takes payment in barter, usually in the form of books or (her especial favorite) maps. She has a rather impressive collection of maps from all over the continent. She keeps her eye out for acquisitions and even maintains regular contact with certain merchants who actively search for fresh prospects. She is more interested in the artistry of the pieces than their practical use, but the more distant the land depicted (whether in space or time), the more desirable the map. From these examples, Analise has learned quite a bit about cartography, and has even produced her own depictions of Summerwater and its environs. Corliss never had any talent for drawing, but she studied her mother's collection wistfully, always wondering what lay beyond the borders of each yellowed piece of parchment.

As Corliss grew older, she spent more and more time in study, even traveling to the capital to learn what she could of the humans and to provide clerical services for the halflings who made their living among the Tall Folk. In the Private Archives of House Rospair, she found much that delighted and intrigued her, until public access to the libraries was discontinued. She heard rumors that a foolish wizard's disastrous experiments were to blame (experiments which resulted in the permanent infirmity of Janvia, the Duke's daughter. Dishearted, she returned to her people, and discovered that Summerwater was in what passed for an uproar among three-foot halflings: Estilyon was involved in negotiations with Actasur to hand over Crucleoht (and thus, Summerwater) to the free-trading city-state. Though some argued that this could be a favorable turn of events, Arden Naith, the current Eldest, was not so sure. After scolding Corliss for being so wrapped up in her studies that she was oblivious to the political upheaval around her, he decided to send her away from home for a time, to investigate the human kingdom, its neighbors, and the dark intentions that the followers of Yondalla suspect may be behind the recent troubles with the humans.

Corliss has a carefree personality. She is slow to anger or take offense, even though she is quick-witted enough to catch the subtle slights that the Tall Folk sometimes send her way. Though her people have not always been treated with respect by their neighbors, she does not judge a person by their height, and is always willing to make new friends. She is a devout follower of Yondalla, and seeks to bring life and laughter to any situation, whether it is a battlefield or an evening in the tavern. She is reluctant to fight before other options have been exhausted, but is tenacious once conflict appears to be inevitable. She is naturally curious, but will not ignore any creature's distress if there is something she can do to relieve it, and she would certainly not satisfy her curiosity at someone else's expense.

There is a potential for darkness in her, however. She has never suffered any great loss of kith or kin, so her capacity for wrath has never been truly tested. She is optimistic and diplomatic because she is filled to brimming with the idealism of youth. A hard lesson may darken her heart and turn her worship to the vengeful aspect of her goddess...

1. Though they only use ponies themselves, and those rarely for riding, some of the halflings of Summerwater seem to have a talent for persuading beasts three times their height to move docilely in and out of stalls. A pair of siblings, Fen and Lora, are known for their efficient and gentle handling of even the most spirited mounts. Those two enjoy the job so much that they work longer portions of the year than anyone else in Summerwater.

Title: The Resilience of Dust
Characters/Pairings: Merlin, Arthur, Greco-Roman Gods
Rating: PG
Word Count: ~7400
Summary: Merlin can't save himself because Arthur is right there, so he has to put up with his king's attempts at a rescue. The result will surprise them both.
Notes: Written for the 2013

merlinreversebb. Based on this fantastic art by

the_little_owl who is ten kinds of awesome for not only creating such an inspirational image but also giving feedback on the plot outline and drafts. Leave your appreciative comments for the artist here!

You're fucking shitting me.

I think I need another drink.

Well. I certainly was not expecting this. Plot twist in a nonfiction book.

"But answer came there none. Hayek remained hushed. Faced with confronting Keynes at full flow, Hayek blinked. Weeks passed, but his expected counter-blast was not forthcoming. Hayek's life purpose, the very reason Robbins summoned him from Vienna to the LSE, a key reason Beveridge had leapt at the chance to appoint him to the LSE staff, appeared to have come to nothing. Keynes's great work was met with neither a bang nor a whimper. Hayek's response, so keenly awaited by classical economists throughout Britain and the continent, was a yawning silence."
-pg 153, Keynes Hayek: The Clash That Defined Modern Economics, Nicholas Wapshott

EDGE OF MY SEAT.

Just once, I'd like to read an SPN fic where the boys use incendiary rounds to take down a wendigo. Flare guns made sense as an improvisation in the actual episode, but they are a little ridiculous if the monster's identity is known from the get go.